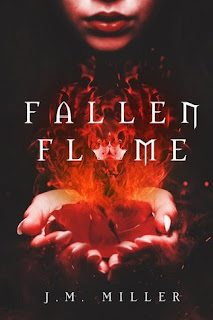 Synopsis from Goodreads
Nineteen years ago, on the island kingdom of Garlin, a girl was born. With charred skin as rough as rock, Vala was instantly feared. For how could one be scorched by magic when it had perished ages before?

Recognizing an asset, the royal family welcomed her on their Guard. Her detail: the prince.


To watch. To protect. She has grown with him, lives her life for him.

When the high kingdom’s princess comes to assess the prince, assassins of rival courtiers come to claim his life. One nearly succeeds in his mission. But with shadowy movements and charred skin like her own, Vala knows he is not like the rest.
As threats to the prince continue and questions about Vala’s life begin to rise, she faces a fear worse than fire or water, worse even than losing him. She fears finding out who she truly is.
Add on Goodreads
Authors Amazon Page
Expected publication: June 19th 2017
Why I Am Waiting
I was -of course- firstly drawn to the cover, it does make me think a bit of a typical urban fantasy (witches) cover. However, I love the colouring and that cute crown. Regarding what we are told about the story, there are several things which has drawn me. Firstly the implied guard/prince(/ess) trope, love this trope a great version of the star-crossed lovers situation. Secondly, there is obviously some kind of magic in the 'island kingdom of Garlin' this isn't explain much (at all really) in the synopsis so I look forward to exploring that aspect. The synopsis also suggests that we have a kick-ass main character (?) trained as a guard from a young age and trusted to protect the prince, she gotta be a bit kick-ass right? Lastly I think the blurb raises some questions; who where her parents that she would come onto the radar of royalty? Who is she truly?
by hills of books