One Life to One Dawn.

In a land ruled by a murderous boy-king, each dawn brings heartache to a new family. Khalid, the eighteen-year-old Caliph of Khorasan, is a monster. Each night he takes a new bride only to have a silk cord wrapped around her throat come morning. When sixteen-year-old Shahrzad's dearest friend falls victim to Khalid, Shahrzad vows vengeance and volunteers to be his next bride. Shahrzad is determined not only to stay alive, but to end the caliph's reign of terror once and for all.

Night after night, Shahrzad beguiles Khalid, weaving stories that enchant, ensuring her survival, though she knows each dawn could be her last. But something she never expected begins to happen: Khalid is nothing like what she'd imagined him to be. This monster is a boy with a tormented heart. Incredibly, Shahrzad finds herself falling in love. How is this possible? It's an unforgivable betrayal. Still, Shahrzad has come to understand all is not as it seems in this palace of marble and stone. She resolves to uncover whatever secrets lurk and, despite her love, be ready to take Khalid's life as retribution for the many lives he's stolen. Can their love survive this world of stories and secrets?

Inspired by A Thousand and One Nights, The Wrath and the Dawn is a sumptuous and enthralling read from beginning to end. 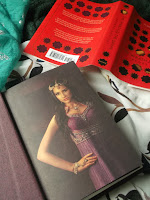 The first thing I have to mention is the beautiful cover and first few pages of this book. I love the way in which the cover shows us the girl through these star/sun shaped windows, and then in the inside page we get to see the full picture. Another thing I should mention is their is a glossary (it has all the different characters and what the different titles mean), which would have been really good to know about before starting to read however I didn't find it till I was about three quarters of the way though. I think it would have been better of it to have been at the front of the book, rather than the end as this would have made it easier to find.
I have to say that I have never read A Thousand and One Nights (the tale which inspires this story) and I wasn't to knowledgeable about the storyline so I can't comment on how close it is to the original, but it is a amazing story either way.
The prologue is (as with most prologues) slightly confusing but we do get -even at this stage- hint as to why the he does what he does. Also as the prologue is from a male point of view -we can guess who he is- and we get this introduction to his vulnerability and the burden that he carries.
This book get straight into the action and the first chapter we get this great introduction to the main character as a strong-headed, stubborn, caring  yet murderous woman who is full of hate and grief. The relationships between the different characters in the book are slowly revealed to us, some of them taking me by surprise.
The main theme in this book mystery not only about the king but all the charters have secrets that aren't fully explained for a long time. The ways in which people avoid answering questions come in so many varied forms in this book, I enjoyed Shahrzad's stories and the power that these words had. I loved all the character's in this book and enjoyed the way in which each one interacted with Shahrazad. I especially enjoyed the banter that she exchanges with her handmaiden. I also enjoyed the way in which Shahrazad was friendly but also always wary and on the look out for betrayal.
I enjoyed the setting of this book and I can wait to get to read more about the wider world in following books. I am also intrigued to see what part magic will play in sequels as in this book I feel as though we have only just brushed the idea of magic.
This is a roller-coaster, action packed, romance and I can't recommend it enough. The ending will leave you needing the next book and when book 2 does come out in 2016, I stall be there will my list of unanswered questions hoping for some answers.
I think the main question I thought of while reading this book is; how far will people go for love and for hate?
by hills of books