Fairly controlled book buying month this August for me, some of my highly anticipated releases came out this month so I haven't bought many other books: 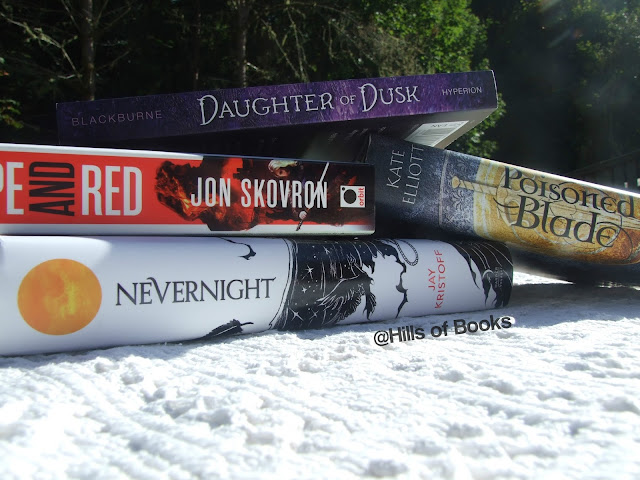 Nevernight (The Nevernight Chronicles #1) by Jay Kristoff
Add on Goodreads
Synopsis From Goodreads
Destined to destroy empires, Mia Covere is only ten years old when she is given her first lesson in death.
Six years later, the child raised in shadows takes her first steps towards keeping the promise she made on the day that she lost everything.
But the chance to strike against such powerful enemies will be fleeting, so if she is to have her revenge, Mia must become a weapon without equal. She must prove herself against the deadliest of friends and enemies, and survive the tutelage of murderers, liars and demons at the heart of a murder cult.
The Red Church is no Hogwarts, but Mia is no ordinary student.
The shadows love her. And they drink her fear.
Hope and Red by Jon Skovron
Add on Goodreads

IN A FRACTURING EMPIRE SPREAD ACROSS SAVAGE SEAS, TWO PEOPLE FIND A COMMON CAUSE.
HOPE, the lone survivor of a village massacred by the emperor's forces, is secretly trained as a warrior and instrument of vengeance.
RED, an orphan adopted by a notorious matriarch of the criminal underworld, learns to be an expert thief and con artist.

Together they will take down an empire.
Poisoned Blade (Court of Fives #2) by Kate Elliott
Add on Goodreads

Jessamy is moving up the ranks of the Fives--the complex athletic contest favored by the lowliest Commoners and the loftiest Patrons in her embattled kingdom. Pitted against far more formidable adversaries, success is Jes's only option, as her prize money is essential to keeping her hidden family alive. She leaps at the chance to tour the countryside and face more competitors, but then a fatal attack on Jes's traveling party puts her at the center of the war that Lord Kalliarkos--the prince she still loves--is fighting against their country's enemies. With a sinister overlord watching her every move and Kal's life on the line, Jes must now become more than a Fives champion.... She must become a warrior.
Daughter of Dusk (Midnight Thief #2) by Livia Blackburne
Add on Goodreads

Though she's formed a tentative alliance with the Palace, Kyra must keep her identity a secret or risk being hunted like the rest of her Demon Rider kin. Tristam and the imprisoned assassin James are among the few who know about her heritage, but when Tristam reveals a heartbreaking secret of his own, Kyra's not sure she can trust him. And with James's fate in the hands of the palace, Kyra fears that he will give her away to save himself. Kyra and Tristam fight to save their city from dangerous invaders in this high-fantasy sequel to Livia Blacbkburn'es Midnight Thief.

What books did you get this month? Have you read any of my new books yet?
﻿
by hills of books