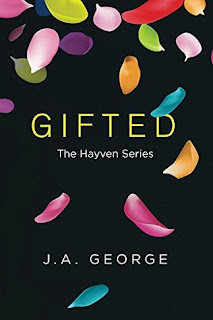 Add on Goodreads
First Published May 10th 2015
Buy from Amazon (UK) || Amazon (US)
Source: e-copy received in exchange for a honest review.

Avery Gray was just in the wrong place at the wrong time and happened to make a decision that altered her future forever. It happens to all of us every day.

Avery is a size twelve university student with a penchant for dry humour, and she’s as normal as they come. Up until now, the biggest choice she’s had to make was glasses or contacts? At the moment, it’s stay and save, or leave and be saved.

Allow me to explain. One rainy afternoon, Avery had to make a choice: go through the alleyway or around it. Two possible options. One would have had her future continue on as planned, the other would ensure that her future never remained the same again. She unknowingly went with the latter.

But change is not always bad. Avery meets Theodore-James Connors, an enigmatic young man who takes her to Hayven, a city separated from the rest of the world, where only gifters – ordinary people with extra-ordinary gifts – can go. She soon finds herself in a close-knit group of friends she’d never have imagined herself in. Friends who are diverse in every possible way, from their ethnic backgrounds, to their personalities, from their gifts, to their life stories. Friends who make her laugh, who make her cry, who make her think and who make her…her.

However, change is not always good. The beautiful, golden city of Hayven has its dark side – Cliders. Gifters turned rogue, aka, Cliders are determined to aid fallen Clider, Madrina, return to rule Hayven. They will stop at nothing to make that happen, including harming those Ava has grown to love.

Again, Ava is faced with a choice: spend her days finding a way to inhibit Madrina’s return, or walk away. After all, she isn’t the chosen one. Yet, there exists a third option – rig the future itself and make it work for her.

One of the first things I noticed when I started to read this book was the descriptive style of writing. This detailed description is most prominent in the first few chapters but as the characters return to familiar places these long descriptions become less frequent.
At the start of the book everything is a bit confusing and for the first few chapters I wasn't entirely sure what was going on. It was very cleverly written because as the reader, you are searching and hungering for more information just as the main character is.
It was clear quite early on in the book that relationships was going to be an important feature. Also with the help of the gift it was clear that their relationship's weren't going to be straight forward. With the introduction of new characters and as Avery get's to know more about each of this new group, it is clear they too have their own web of relationship issues.
I got so caught up in Avery's discovery and exportation of the gifted, as well as the relationship drama that I had forgotten about the prophesy/prediction that Sidra told Avery just before her death. It wasn't until about half way through that it began to play a big role in shaping the storyline. The second half felt far more like a fantasy story, and it puts everything in place for an interesting and dramatic sequel.
Overall this book was a lovely blend of YA contemporary and fantasy, where an unlikely incident leads a student on a path she never imagined possible. A web of relationship issues that I look forward to being unravelled and doom and gloom prophesy that much be prevented from becoming reality. This book has a great range of characters and so many interesting gifts which I can't wait to see in action.

J.A. George visited the blog a few weeks ago and did a interview check that out >> here <<
by hills of books