The Blue Eyes Trilogy by B. Kristin McMichael 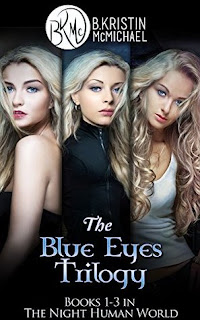 Synopsis of Book One: The Legend of the Blue Eyes

Arianna Grace liked her boring, Midwestern, teenage life where she ignored the many unanswered questions of her childhood. Why were her parents dead? Why did she not have family? Where was she raised until she was five? When someone offers to explain it all, Arianna thinks she’s just getting answers. Instead, she is thrown into a world of night humans who drink blood.

On Arianna's sixteenth birthday, her world is thrown upside down when she changes into a vampire. Night humans, or demons, as some call them, live in normal society. Learning all of the new rules of a world she didn’t know existed might be hard enough, but it's further complicated by two former-friends that now want to help her take her role as the successor to her grandfather.

There is a war going on between the night humans. Sides have been taken and lines are not crossed. Four main clans of night humans are struggling for control of the night. Divided into two sides, clans Baku and Tengu have been at war for centuries with the clans Dearg-dul and Lycan. That is, until Arianna Grace finds out the truth; she’s the bridge of peace between the two sides. But not everyone wants peace. With the night humans divided, Arianna is now a pawn in the war between them. She must choose a side—her mother’s family or her father’s—and for once in her life, decide her own fate.
(No Spoilers for any of these books - for feel free to enjoy)

Thoughts on  the Whole Trilogy:

3 Stars
This trilogy start with a popular trope of 'surprise-your-supernatural' but the Night Human World has an interesting variety of species, a legend and multiple potential romances. The second book was a bit of a dip in enjoyment for me although some important relationship developments occur. The final book in this series was defiantly the best book in this series with Arianna finally finding her feet, fulfilling the legend, and sorting out her feelings for the people around her.

Review of Book One: The Legend of the Blue Eyes

I picked this book up free on kindle late one evening and was presently surprised. The book is by no means a perfect story but as you can see by my rating it was an enjoyable book. Because there were both good and bad things about this book I have spilt them into two lists:

What I did like:
Overall this was an enjoyable book a quick fun read with a few things that weren't great but nothing that shopped me reading. I hope that now Arianna is beginning to get use to this new world that in the next few books we get a slightly more original storyline.

I felt as though this book was a bit of a filler book. Important things did happen in the: romance side of this plot; the development and destruction of trust between central characters and Arianna also took so important steps toward find her place in the Night Human world.

I enjoyed this book so much more than the second book. The competition added so much to this story with yet more people playing for Arianna's hand in marriage. I also enjoyed the development in the relationships between Arianna's and her friends and keepers. I really enjoyed Arianna's resolve to get rid of the traditions and her desire the prevent war. She is really clever in her strategy for achieving these two goals. An enjoyable and to the trilogy.
by hills of books