Show Me The Books #2: Defying the Family (Fantasy Edition)

Show me the Books is a feature where I share with you some books within a theme, and then hopefully you, will tell me in the comments (or link to your own blog post) other books that you have heard of or have read within that theme.

This weeks theme is, books where the main character goes against the wishes of their family. When I started thinking of the books I have read within this theme, I came up with far to many for one post. So, I am going to split them into groups and this week I shall focus on the ones from within the fantasy genre.

1) Rebel of the Sands by Alwyn Hamilton
Add on Goodreads

Rebel of the Sands is such an amazing book (see my thoughts here) which begins in a western style village and follows a girl as she runs away from her family. It then develops into a Arabian Nights style world full of even more adventure and action.
2) The Kiss of Deception by Mary E. Pearson
Add on Goodreads

The is another book where the main character runs away from her family. She is a princess promised in marriage but she decides to hide in a inn instead. The thing that kept me reading in this book was that she is followed by an assassin and the prince she is promised to, but she (and the reader) doesn't know which is which,- see all my thoughts here.
3) Court of Fives by Kate Elliot
Add on Goodreads 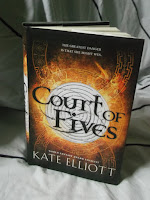 Court of Fives (see my review here) follows Jes as she competes in a competition called the Fives. She does this without her fathers knowledge as he is trying to keep the family upper-class image and competing in the Fives isn't a what an upper-class lady should be doing.
4) Graceling by Kristen Cashore
Add on Goodreads

A popular fantasy which I really enjoyed. Katsa's uncle is a bit of brute so I am glad that she decides to defy him and do things her own way.
5) A Ranger's Tale (Tallenmere #1) by Mysti Parker
Add on Goodreads

I have to say that I don't remember too much about this book, other than it follows a high-class elf as she attempts to learn to be come a ranger in a world where women do as their told - i.e marry who your farther says and go into the families chosen profession!
***

NOW IT'S OVER TO YOU

Have you read any of these book's I've mentioned? What did you think of them?

Have you read (or looking forward to) any Fantasy books that fit this theme ?