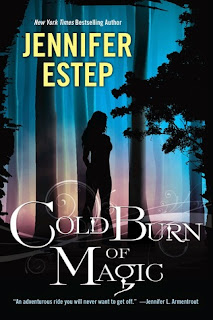 There Be Monsters Here. . .

It's not as great as you'd think, living in a tourist town that's known as "the most magical place in America." Same boring high school, just twice as many monsters under the bridges and rival Families killing each other for power.

I try to keep out of it. I've got my mom's bloodiron sword and my slightly illegal home in the basement of the municipal library. And a couple of Talents I try to keep quiet, including very light fingers and a way with a lock pick.

But then some nasty characters bring their Family feud into my friend's pawn shop, and I have to make a call--get involved, or watch a cute guy die because I didn't. I guess I made the wrong choice, because now I'm stuck putting everything on the line for Devon Sinclair. My mom was murdered because of the Families, and it looks like I'm going to end up just like her. .

Jennifer Estep has yet again managed to create a unique setting and kick-ass main character. I read some of her Mythos Academy series years ago and remember enjoying it (although I can't really remember much about it!) and I am steadily working my way through the HUGE Elemental Assassin adult Urban Fantasy series (I am 12 book in!) and it's been such an amazing ride so far. The Black Blade series has been on my radar for ages and I have talked about it my releases posts, but I hadn't actually read any of them. So with the third book being release recently I thought it was time to finally read a Cold Burn of Magic, and I wasn't disappointed.
"Be good, Lila. Or be really good at being bad." - Page 106
The first chapter sets us up for the rest of the book, we get to see Lila's abilities as a thief and my initial impressions of her character was confident, slightly selfish and care free. However, when she gets home (aka the library) we get to see a completely different side to her, she's lonely (although this is by her own design) and obviously still grieving her mother, yet she is still greatly independent and skilled. Her confidence and bravery is most prominent when she is negotiating with the Head of one of the Families, she is suborn and isn't scared to barter. Through out the book we also get to see Lila's dry humour as she always seems to have a sarcastic response to everything.
"My emotions were the things I guarded most closely, covering them with sticky fingers and smart-ass comments.
-Page 224
I liked the gradual introduction to the towns quirks and magic. Along with the violent workings of the feuding families. I really enjoyed reading about the teenage political moves between the Families. This kind of odd but I liked that we have this general feeling of annoyance towards the tourists. I think this is a realistic situation, where the locals 'tut' and complain about them, yet encourage them to be there as they bring money with them.
" It was more Hatfields and McCoys, or Capulets and Montagues, than fairy tale come true, but the town officials had prettied up the past, just like they had everything else."
- Page 20
I know that the series is called Black Blade but I wasn't expecting the open wearing of weapons and the regular use of them. This along with the ban on gun makes Coldburst Falls ('the most magical place in America') a strange mix between modern luxury and medieval warfare.
Devon is in many ways similar to Lila, he is also grieving the loss of a parent but he hides it behind his own mask of confidence and determination. He too has secrets to hide - that could lead to his death - but unlike Lila he is in the spotlight so is under more scrutiny. It was great to see the friendship grow between Devon and Lila and development of the trust of each other in life threatening situations.
There are some great side characters in this book. Felix is one of those characters that would be everyone's friend with his welcoming attitude, although he might get a bit annoying with his constant flirting and chatter. Despite this two things he is a great guy and I can't wait to see where his own Romeo and Juliette romance goes. Oscar is just the best, who wouldn't want their own redneck cowboy pixie, who drinks slightly too much honeybeer and plays country music too loud?
There is mystery surrounding the death of Lila's mother and I enjoyed the way in which throughout the book we gradual build up a picture of what happened and why Lila blames who she does. So by the end of the book we have the full picture of what happened to her mother and her connections to the families. Although we are left with questions surrounding Lila's father which I hope we will learn more about in the sequels. 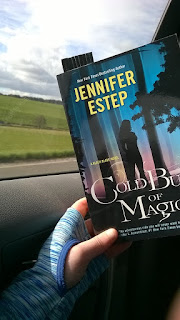 Overall, this book was another amazing story by Jennifer Estep with magic, swords fights, mafia style families with thief's and traitors. I loved the main character who is dealing with grief and trust issues yet is kick-ass, sassy, and confident. It has some great side characters that you can't help but fall in love with, all set within a quirky tourist town.
***
Have you read any of Jennifer Estep's books?
What are your thoughts on her books?﻿
by hills of books