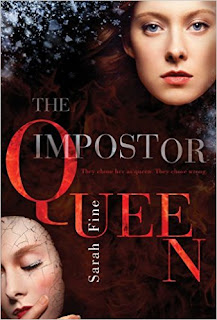 The Impostor Queen (The Impostor Queen #1) by Sarah Fine
Add on Goodreads
Published January 5th 2016 by Margaret K. McElderry Books
ISBN: 1481441906
Buy from: Amazon (UK) || Amazon (US)
SYNOPSIS FROM GOODREADS
Sixteen-year-old Elli was only a child when the Elders of Kupari chose her to succeed the Valtia, the queen who wields infinitely powerful ice and fire magic in service of her people. The only life Elli has known has been in the temple, surrounded by luxury, tutored by magic-wielding priests, preparing for the day when the queen perishes—and the ice and fire find a new home in Elli, who is prophesied to be the most powerful Valtia to ever rule.

But when the queen dies defending the kingdom from invading warriors, the magic doesn’t enter Elli. It’s nowhere to be found.

Disgraced, Elli flees to the outlands, home of banished criminals—some who would love to see the temple burn with all its priests inside. As she finds her footing in this new world, Elli uncovers devastating new information about the Kupari magic, those who wield it, and the prophecy that foretold her destiny. Torn between her love for her people and her growing loyalty to the banished, Elli struggles to understand the true role she was meant to play. But as war looms, she must choose the right side before the kingdom and its magic are completely destroyed.
﻿
COLLECTION OF REVIEWS
Review @ Teen Reads
Review @ The Perpetual Page Turner
5 Star Review @ Paper Fury
5 Star Review @ Tripping Over Books
5 Star Review @ My Friends Are Fiction

Back in January when this book first came out I can remember stumbling across loads of reviews for this book, now, well I can't seem to find that many! So a quick apology for the limited number of reviews in this collection, and if you have done a review and I haven't linked it above I would love for you to link it in the comments. Anyway, those reviews that I have found seem to give us a bit of range of views so here is what I have gleaned about The Imposter Queen:

Quite a few people found that the pacing at the start of the book was slow (with one review mentioning that they found the middle a bit slow), while other people enjoyed this gradual build up of the information and the world. Some people had a bit of issue with the terminology used but there was a general love for the magic system and the majority seemed to love the world building. Over all most people loved the main character, some think she was a bit naïve (but I think that was planned) with some finding this endearing. The fact that she is bisexual answered the call of those who were/are looking for more diversity in YA.

I don't think these reviews have changed my views too much on The Impostor Queen. I still want to read it and try it myself. I don't think I was ever expecting it to be a 5 star read but I had high hope for it and the general rating of 4 stars is what I am hoping for.

Have you read this book? What did you think of it (feel free to just type or you can share link to a review)?

Was this review collection helpful?
Have these reviews made you want to read the book or made you hesitate to pick it up?
by hills of books