Rebel of the Sands (#1) by Alwyn Hamilton 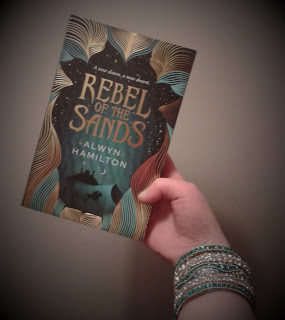 She’s more gunpowder than girl—and the fate of the desert lies in her hands.

Mortals rule the desert nation of Miraji, but mystical beasts still roam the wild and barren wastes, and rumor has it that somewhere, djinni still practice their magic. But there's nothing mystical or magical about Dustwalk, the dead-end town that Amani can't wait to escape from.

Destined to wind up "wed or dead," Amani’s counting on her sharpshooting skills to get her out of Dustwalk. When she meets Jin, a mysterious and devastatingly handsome foreigner, in a shooting contest, she figures he’s the perfect escape route. But in all her years spent dreaming of leaving home, she never imagined she'd gallop away on a mythical horse, fleeing the murderous Sultan's army, with a fugitive who's wanted for treason. And she'd never have predicted she'd fall in love with him...or that he'd help her unlock the powerful truth of who she really is.

I was drawn to this book because of the djinni/ the Sultan giving it this Aladdin style and then the twist of an western feel mixed in. I have to say I wasn't disappointed by this book I love the mix and the book was an amazing action packed read.
"You are this country Amani ... more alive than anything ought to be in this place. All fire and gunpowder, with one figure always on the trigger."
Rebel of the Sands starts out with some great world building and you can quickly get the feel of the rural bar where everyone knows everyone and someone who isn't a local would stick out a mile. I instantly liked Amani as a character, even within the first chapter we get to see her sharp shooting skills and her determine attitude. It is also clear very early on that she hates living in the dead-end town of Dustwalk and has nothing there to entice her to stay. I also liked Jin as a character he was mysterious but caring and creates some great banter with Amani, as well as some more awkward moments.
"Either I'm dreaming or I'm dead"...
"Dream about me often?"
"Dreams. Nightmares. Not sure"...
"Come on, dream yourself to your feet."
The myths and legends were a great addition to this story at first I didn't really see the point in them but as I read more I realised this did play an important part in the world building. I am fascinated by how some of the more magical elements of this story work with their consequences and I can't wait to see more of them in the rest of this series.
The revelations around page 260 completely change the feel of the plot from the teenage girl running away from the life she doesn't want, to more of 'Rebel of the Sands'. From this point onwards Amani is hit with surprise after surprise.
Although we aren't left with a cliff hanger at the end of this book it does leave you wanting more, to me it feels more like a pause in the story which often isn't the case with book in series (does that make sense?)!