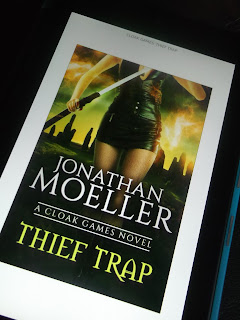 In 2013, a gate to another world opened, and Elves used their magic to conquer Earth, crushing all resistance before them. Three hundred years after the Conquest, the exiled Elven High Queen rules an orderly but stagnant Earth, with humanity forced to fight in the High Queen’s war against the traitors on the Elven homeworld.

Fortunately, Nadia has magic of her own, and she’s a very, very good thief. Unfortunately, the powerful Elven lord Morvilind has a hold on Nadia. If she doesn’t follow his commands, her brother is going to die.

First thing first, the beginning of this book just hooks you right in, and you just can't put it down. This was completely a impulsive buy I was scrolling through my Facebook newsfeed and saw a post from Jonathan Moeller, advertising that he was publishing a new book and that the beginning was free on his website. So I check it out the book on his website then the next day I had downloaded this book! I haven't regretted this snap decision as I have enjoyed this book greatly. As I have mentioned the beginning of this book is great, the first sentence just set it all off with:
"One of the earliest things I remember is watching the entire United States
Congress commit suicide on National television."
I mean wow, what a way to start a book! This book just goes from one 'surprise' moment to the next. This is a fast paced book and full of action. I liked that as well as surprises we also have a mystery surrounding Lord Morvilind, and Mr Corvus and there is mystery sounding the tablet as well! I also enjoyed that there was a promise of romance in this book and the ending definitely left it open to that possibility.
I love the main character she has (as is pointed out) a smart mouth and she is a total kick ass. I also like the different way which she interacts with the different people, I enjoyed her interactions with James the most, he seems like the only person she can half confide in even if she can't tell him the whole truth.
There are only two things I didn't really like about this book:
1) The cover -  I know that urban fantasy book's often have this kind of cover, but I don't think it represented the book well and the only black dress I can remember is a cocktail dress which I didn't imagine like the outfit on the cover.
2) The book was quite short (less than 200 pages). However Jonathan Moeller is a fast writer so the next book I am sure won't be too far away.