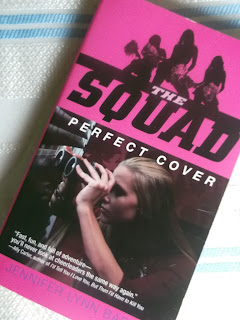 Toby Klein; a sophomore computer hacker who doesn't play well with others. She has zero school spirit, a black belt in karate, and what her guidance counselor calls an attitude problem. She's the last person you'd expect to be invited to join the varsity cheerleading squad.

Bayport's varsity cheer squad is made up of the hottest of the hot. But this A-list is dangerous in more ways than one. The Squad is actually a cover for the most highly trained group of underage government operatives the United States has ever assembled. They have the perfect cover, because, beyond herkies and highlights, no one expects anything from a cheerleader.

Toby Klein might not seem like the most likely recruit, but she's never been one to turn down a challenge. If she can handle the makeover, Bayport Hight may just have found its newest cheerleader.

This book was a light and fun read. I loved the idea of the 'airheaded' cheerleaders being government operatives and made me think of the film Miss Congeniality, apart from the main charter Toby doesn't have any official training.  The notes exchange at the beginning of this was a great way to introduce the idea, as it showed clearly to two sides of Bayport's cheerleaders. I also liked that there was a range of different personalities within The Squad, and that although they were friends and would always stick up for each other there were times and situations where they didn't get on. This made the friendship groups interaction more realistic in my opinion.
There is a hit of romance in this book, I would have liked slightly more of the romance between Toby and Jack, and slightly less of Noah's constant talk of hot girls. I liked the way in which Toby changes and adapts to the new situation which she finds herself in, and I enjoyed her internal thoughts they help to make the book more humours. The change in the vice-principal's attitude towards Toby just shows what popularity can do for a person, and how being popular  can change the way in which people treat you, we can also see this in the wild rumours which begin as Toby becomes the newest member of the 'opular group.
Other things I liked about this book were the chapter headings which combined the two sides of the cheerleader squad very well. For example: 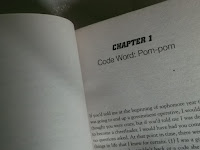 I also like the dedication in this book, often book dedication are just a name I like that Jennifer Lynn Barnes has gone into detail about who Michelle is, it was also great to see that she had included in her book advice that she had herself been given:

Over all, a great read and would recommend it to all those who enjoyed the I'd Tell You I Love You, But Then I'd Have to Kill You by Ally Carter or Model Spy by Shannon Greenland.
﻿
by hills of books