So in April I finally started this series (and binge read them) and although I enjoyed the first book (see my review here) I was still searching for more. I was expecting more from this series and I found it in books two and three, so here are five (spoiler free - as much I can be) reasons why you should keep reading the Winner's trilogy:


1) Heartbreak and Loss
These two books are full of heart-breaking moments between people who once upon a time were good friends but now things have come between them. Also as some secrets are kept you can see the barriers between friend being built higher and higher. Loss come both in the form of the breaking of relationship as well as loss of life.
2) Mental and Physical Wounds
What got me was the mental wound that characters go through during these book, although they were -once again- heart breaking to read about, they were totally unexpected and kept me on the edge of my seat.
3) Betrayal and Secrets
Secrets -one in particular- completely shapes The Winners Crime and I have to say I enjoyed every tense and heart-retching moment, where the character does their best to keep that secret hidden. Be on the look out for that betrayal I was totally shocked when it happen - although looking back I not sure why I didn't expect it.
4) Political Manoeuvres and Tense Moments
If you have read the first book then you will know that political manoeuvres are Kestrel's thing, and it was great to see how these played out thought out these two books. I also love some of the tense convocation's between Kestrel and the Emperor.
5)  Romance
Just got to adore the romance in these books, there were points in the book where I thought it was all going to be over for the obvious ship from book one. Also, with the amount that both of them got thought and how this changes them, is vast from book one to book three, and there was also moments when I thought we could have another 'Allegiant' ending to the series. 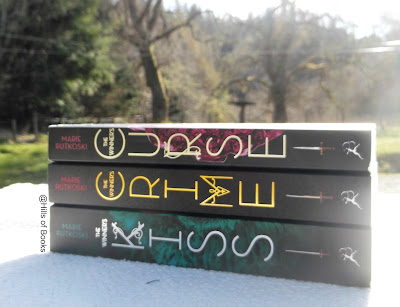 That became more of a rant than I was planning (sorry about that) but it over and I wondered if these changes were also present on you editions of this trilogy?