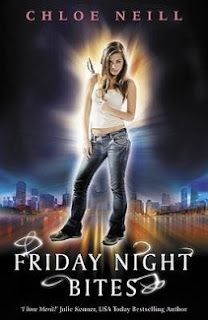 Ten months after vampires revealed their existence to the mortals of Chicago, they're enjoying a celebrity status usually reserved for the Hollywood elite. But should people learn about the Rave mass feeding parties where vampires round up humans like cattle[the citizens will start sharpening their stakes.
So now it's up to the new vampire Merit to reconnect with her upper class family and act as liaison between humans and bloodsuckers, and keep the more unsavoury aspects of the vampire lifestyle out of the media. But someone doesn't want peace between them - someone with an ancient grudge.

1) Mystery / Crime Solving with a Deadline

Who doesn't love a good crime prevention with the a countdown to disaster? The tension, the drama!

It was sad - but understandable- that we get some tensions between Mallory and Merit. There was a point where I thought this (and various other emotional issues) were going to crush our kick-ass vampire girl but she kept pushing through.

Yes, we get to read about that glamourous life that Merit thought she had left behind. I hope we get to see more of her family in later books, we got fleeting moments with most of her family.

4) Two Vampires and One Ex-Boyfriend

When Merit thought her love life couldn't get any more complicated, that ex-boyfriend just had to show up, with his own issues and secrets. I am really enjoying the romance side of this series so far.

Looks like the Shifter's are about to take centre stage in this series, with hints that maybe Merit might have some part to play in it all.
by hills of books