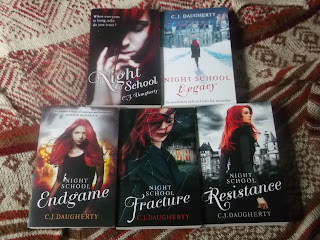 I recently marathon read these books (read them one after the other). Although I have written individual reviews for most of this series, I thought I would try to sum up my over all thoughts and feelings about the Night School world, it's charters and plot.


This series consists of five books:

My Summery for the plot:

This book starts off in a way which reminds me of the beginning of the film 'Wild Child', where a teenager is going through a rebellion and their parents send them away to boarding school (Cimmeria Academy). The rebellious teenager in this series is called Allie who is dealing with the disappearance of her older brother.

Once she arrives at this school she is given a pile of papers full of rules which must be kept, many of them surround the Night School which is for selected pupils and is very secret and mysterious. After Allie is attacked one night she becomes desperate for answers but answers can sometimes be dangerous. As Allie learns more about Night School she also finds out more about herself and her family. 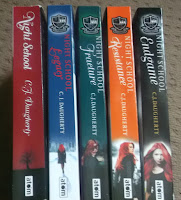 In the first book there is a focus on secrets and mystery surrounding what is happening at Cimmeria Academy.There is secrets though out this series and even in the last book there are revelations but the number of secrets do decrease as Allie works out what is happening around her. By the third/fourth book the main theme I would say is the conflict (something I can't really tell you about without spoilers). The romance and friendships continue through out this series, yes there is love triangle which was created by indecision but it wasn't the worst love triangle I have read. There are lots of friends in this book who all have there own problems  and secrets which effects there friendship with Allie.

It took me a while to 'get to know' all the different characters in this series I think this might have been due to the fact most of them had so many secrets that they kept from Allie. Character's also changed in the course of these books, the most obvious change was in Allie herself. She describes this change in 'Endgame': 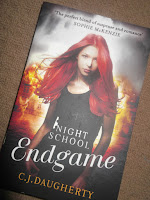 Although she does become kickass she manages to keep a  hidden vulnerability and gentleness. Sylvain also changes quite early on in the series and Carter... well his personality is up and down all over the place.

I loved the idea of what Night School and the mystery of the first book was well written as we only ever knew as much as Allie did, which was often not much (especially in the first book). I spent most of the series wondering if there was going to be a 'peaceful' solution to the conflict or if everyone was just going to end up killing each other. I did enjoy the ending although I would love to have read slightly more maybe a 6 month later chapter (or another book!).

I couldn't write about these books and not mention the covers I mean books 2-5 are just so dramatic, the spines also look great on my shelf (always a bonus!).  So over all these were full of action with that splash of romance that I enjoy. The third and fourth books were my favourite books as Allie has begun to understand everything and begins to fight back.