Queen of the Tearling (#1) by Erika Johansen 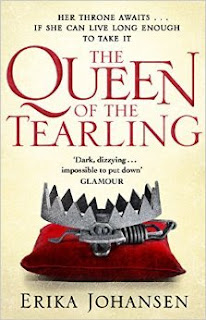 Kelsea Glynn is the sole heir to the throne of Tearling but has been raised in secret by foster parents after her mother – Queen Elyssa, as vain as she was stupid – was murdered for ruining her kingdom. For 18 years, the Tearling has been ruled by Kelsea’s uncle in the role of Regent however he is but the debauched puppet of the Red Queen, the sorceress-tyrant of neighbouring realm of Mortmesme. On Kelsea’s 19th birthday, the tattered remnants of her mother’s guard - each pledged to defend the queen to the death - arrive to bring this most un-regal young woman out of hiding...

And so begins her journey back to her kingdom’s heart, to claim the throne, earn the loyalty of her people, overturn her mother’s legacy and redeem the Tearling from the forces of corruption and dark magic that are threatening to destroy it. But Kelsea's story is not just about her learning the true nature of her inheritance - it's about a heroine who must learn to acknowledge and live with the realities of coming of age in all its insecurities and attractions, alongside the ethical dilemmas of ruling justly and fairly while simply trying to stay alive...

This is one of those books that has had quite a bit of love from some of my favourite Booktubers and I can now totally understand why they enjoyed it so much. It was such a great 'mature' YA  (maybe even Adult?) fantasy book.
Kelsea had me a bit worried in the beginning of this book, as she seemed resistant at the idea of becoming Queen and I was worried she was going to be a reluctant ruler who is going to do anything to get out of being Queen.
"The Queen's Guard would cart her back to the keep kicking and screaming, if need be, and imprison her on the throne, and there she would sit, hung with velvet and silk until she was assassinated."
- Page 16
However, she quickly dissipated my fear and showed me she was a determined - slightly hot-headed- strong young lady, who has a strong sense of duty towards the people of the Tearling. I liked that although the moral duty that Kelsea acts upon get her into all sorts of trouble, she doesn't seem to panic but accepts she need to deal with the problems which she is presented with.
"You're young and reckless, Lady. It's desirable quality in a warrior but not a queen."
-Page 71
Kelsea's relationship with her foster parents was a bit strange. From the few interactions we get at the beginning of the story, I got the feeling that they were looked after her out of duty not real love. However, this doesn't match up with the story Kelsea is told later. I love the way in which stories and tale that are told around the campfires are used to help us, as well as Kelsea, get to know the issues and histories of the Tearling.
The threat and attempts of assassination is one - of the many- issues which Kelsea deals with at this early stage of her rule. It makes the her question - and rightly so - the loyalty of everyone around her, and I think that this is - as well as having to deal with so many things at once - what prevents her from getting close to people. I feel as though she could really do with someone to help her emotionally deal with what she is going through, although she trust some of her personal guard they are still reserved and withhold information and not someone she talks about personal issues with. For example, Kelsea begins to slowly find out things about her mother which destroy her childhood image of the perfect mother she had created, wouldn't she want to discuss this? Vent her anger or disappointment?
Fetch, is one of those characters that is just so mysterious that I needed (as still need) to read more about. He obviously has quite a history but has hidden from it using his mask. He is the outlaw that is all too likeable. He is one of those characters that even by the end of the book I don't know if I would class him as a good or a bad character, he is defiantly in the grey area.
"Not just a thief, but a murderer as well...The idea should have brought horror. Kelsea waited for a long moment, but what came instead was an even worse realization it didn't matter at all."
-Page 94
Kelsea isn't the perfect character she often mentions the fact that she is 'plain'. It is also mentioned that her eyesight isn't the best and her need to lose a few pounds and she's not competent using a sword.  However, these things aren't highlighted repeatedly and they defiantly doesn't stop Kelsea dealing with the many issues that she is face within the Tearling: slavery, prostitution, corruption, betrayal and the threat of war. ﻿
"Why dwell on the past, Lady? You have the power to make your own future."
-Page 92
I loved this book so much, it was such a great read, with a plot where something was always happening. It has complex characters set within a fascinating world, full of action and drama.  With so many unanswered questions and potentials, I can't wait for a sequel.
﻿
by hills of books