Fight and Flight (Out of Orbit #2) by Chele Cooke

(Spoilers for Out of Orbit Book 1) 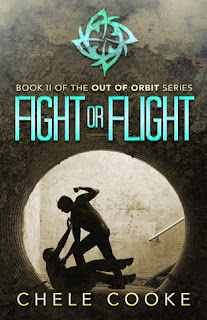 Georgianna Lennox is now a slave, serving an Adveni master and caught in the middle of a brewing war between oppressors and insurgents.

As the rebels increase their attacks against the Adveni, Georgianna is recruited as their eyes behind enemy lines.

But the lies she is forced to tell her owner are nothing compared to the secrets she must keep from her friends.

Secrets that could change the war in their favour, and lies that might destroy them all.

After such a dramatic end to the first book I just had to keep reading this series. I spent most of the prologue trying to work out who was talking but the convocation was useful reminder of the situation that the first book left us in (as if you could forget). The first few chapters explored one of my favourite situations to read about – a female imprisoned – I always find it intriguing to see how they cope with the brutality of prison and often –as in this book- surrounded by male criminals. These first chapters remind us of Georgianna stubborn side as well as her vulnerabilities.


I felt as though the first half of this book was character driven we get to see more of the motives, personalities and history of various characters. Edtroka’s character fascinated me in the first book and I am so glad that we get to read more about him in this book. Originally as Georgianna spends more time with him in this book he seem to have two sides to his personality firstly the distant and sometime mean side where he treats Georgianna like she is nothing to him, and the other side where he is kind and almost friendly towards her.  By the end of the book as we are learn more about Edtroka’s ambitions the switch of moods does make more sense, and I think that Georgianna deals with the mood swings very well while she is kept in the dark about these goals. Kieran has always been another character with unclear motives and in the first half of the book his character becomes even more mysterious and motive even more confusing.  With so many secrets and mysterious happenings it is no surprise that Georgianna has to tell lies and guard secrets, as well as wonder and worry over who to trust.


The second half of this book is full of fights and action, deaths and running for their lives. There were tenses moments I wasn’t sure who would live and who would be captured. I am glad that by the end Georgianna has what I hope will be a friend – one that hopefully isn’t a possible love interest – and she can finally have someone to talk. We get another dramatic ending which once again leaves you wanting more.