Review Collection #9 - And I Darken by Kiersten White 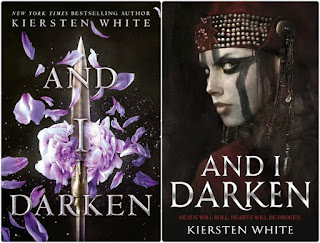 And I Darken by Kiersten White

Add on Goodreads
Hardcover, 475 pages
Published June 28th 2016 by Delacorte Press
ISBN13: 9780553522310
Buy From: Amazon (UK) || Amazon (US) || Wordery || Book Depository
SYNOPSIS FROM GOODREADS
No one expects a princess to be brutal. And Lada Dragwlya likes it that way. Ever since she and her gentle younger brother, Radu, were wrenched from their homeland of Wallachia and abandoned by their father to be raised in the Ottoman courts, Lada has known that being ruthless is the key to survival. She and Radu are doomed to act as pawns in a vicious game, an unseen sword hovering over their every move. For the lineage that makes them special also makes them targets.

Lada despises the Ottomans and bides her time, planning her vengeance for the day when she can return to Wallachia and claim her birthright. Radu longs only for a place where he feels safe. And when they meet Mehmed, the defiant and lonely son of the sultan, Radu feels that he’s made a true friend—and Lada wonders if she’s finally found someone worthy of her passion.

GOODREADS STATS
MY THOUGHTS
I love the idea of this book and have had my eye it for ages (that hardback cover -one on the left- really drew my attention). I originally thought it was a YA fantasy but as I have read through these reviews there seems to be some who think it's alterative history rather than fantasy, I personally don't think there is too much of a difference - thinking of The Crowns Game. So as my copy of And I Darken is still in the post, I can't share my own thoughts on the book yet, but here is what I have gleaned from these reviews:

1) Lada- the main character- seem to have created mixed opinions, some liked that she was just a normal person with determination and didn't need to use magical powers or a pretty face to get what she wanted. Other like the characters are realistically flawed but some thought that Lada spent too much time complaining.

2) The focus of this book seems to be the characters rather than the world building. Some didn't mind this while others thought there should have been a greater focus on building a detailed world.

3) The pacing of the book is an issue that several people highlighted. From what I can gather the book starts with the birth of Lada and from there it 'time jumps' though her life until she is a young adult. People didn't like that this part took so long and made it a slow start to quite a long book.

Over all it seems like an original, dark, brutal story with courtly intrigue and a potential romance.