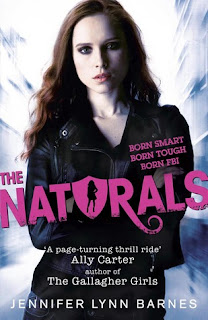 Identified by the FBI as uniquely gifted, Cassie is recruited to an elite school where a small number of teens are trained to hone their exceptional abilites.

For Cassie, trying to make friends with the girls, and to figure out the two very different, very hot boys, is challenging enough. But when a serial killer begins recreating the details of her mother’s horrific crime scene, she realises just how dangerous life in The Naturals could be...


So this book follows Cassie as she joins a small FBI programme of 'naturals' who have different abilities. Cassie's 'gifts' reminded me a bit if Sherlock Homes(especially in the BBC series edition) to solve the crimes by noticing random things about a person and the way he is portrayed or scene and drawing some amazing conclusions. I loved reading about Cassie and her profiling abilities and it was fascinating to watch her profile people from the most simple items and actions.

Although there is a limited number of secondary characters in this book, the majority of them were well fleshed out with some much individual personalities. I enjoyed the dynamics of the teens within this programme, although I will say I felt as thought the romance side of this wasn't completely necessary. It took we a good while to fully understand the 'you' chapters but once I grasped who's point of view it was, these chapters were just fascinating!

I really enjoyed this book, another great series starter for Jennifer Lynn Barnes, it was great to another side of her as author (I didn't realize she had degrees in psychology). I love that she uses her own passions to fuel her plots.
by hills of books