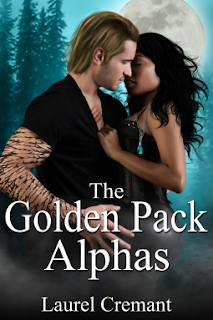 * I received a e-copy of this book for review from NetGallery, but this has not affected my review in any way and all views are my own.*

Were hybrid, Georgia Walker, has spent months avoiding Marcus, the wolf shifter otherwise known as the pain-in-her-ass. The brooding and stalker-ish enforcer makes her lips curl in a snarl, but her skin tighten with need—a combination of reactions that has Georgia tense and less than her usual, affable self. She’s spent her entire life struggling to fit in with her pack. She doesn’t need Marcus around tempting her to flex her control and limits.
Marcus Legrand loves a good chase, and Georgia stirs more than his love of a good hunt. Despite how well Georgia tries to hide behind her snarky sarcasm, he sees more than he knows she’s comfortable with. Her scowls can’t hide the flare of heat that sparks between them each time they meet. He’s tired of Georgia running from him at every turn, but the too-smart-for-her-own-good she-wolf excels at pushing his buttons.

When Georgia's father, current alpha to the Golden Pack announces his successor, it tilts Georgia's world on its axis. With unknown forces endangering the pack, Marcus and Georgia are forced to put aside their differences and work together, even as fate and attraction pulls them closer together.
(Warning; This Book has Mature Content)

This book is a bind up of four episode's but you can barely tell as they flow seamlessly from one to the next.  As I began to read this book I got the feeling that I was going in mid story, especially with the romance side of the book. In many ways this was refreshing as far too often in my opinion a story begins before or just as the people in the potential romance meet, and although I do like that then we do get to read all of their encounters, it is was nice to have some variety.
The main plot diver of the book has to be the steamy attraction between Marcus and Georgia, and the Georgia determination not to give in to her primal instincts and Marcus's stalking. Although there is also this theme of acceptance both in the characters accepting who they are, and also being accepted as part of the pack and the community.
However, although this book was an enjoyable there are two things which brought down my rating for this book.
1) I felt as though quite a few of the secondary characters were flat, I didn't get to know that much about them and didn't grow attached to any of them. Similarly, I felt as though the world itself wasn't overly detailed, I don't know how the systems for the Were-wolves or Vampire etc. I would have like to seen a bit more of the political side of the supernatural's.
2) It wasn't a particularly original story and I have read many with a similar plotline before. Although, having said that there were moments when I questioned how our main characters were going to get out of the situation they had got into, so it wasn't 100% predictable.
by hills of books