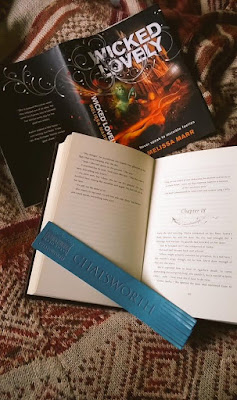 Rule #3: Don't stare at invisible faeries.
Aislinn has always seen faeries. Powerful and dangerous, they walk hidden in the mortal world. Aislinn fears their cruelty - especially if they learn of her Sight - and wishes she were as blind to their presence as other teens.

Rule #2: Don't speak to invisible faeries.
Now faeries are stalking her. One of them, Keenan, who is equal parts terrifying and alluring, is trying to talk to her, asking questions Aislinn is afraid to answer.

Rule #1: Don't ever attract their attention.
But it's too late. Keenan is the Summer King, who has sought his queen for nine centuries. Without her, summer itself will perish. He is determined that Aislinn will become the Summer Queen at any cost — regardless of her plans or desires.

Suddenly none of the rules that have kept Aislinn safe are working anymore, and everything is on the line: her freedom; her best friend, Seth; her life; everything.

I have read this book twice now and I have to say that when I read it in my younger teens I enjoyed it more, however, I did still enjoy it this time. This book quickly sets the scene for this book, the prologue hints at issues but doesn't tell the reader exactly what is happening giving it a bit of a mysterious edge. In the first chapter the reader get lots of information,  the world with fey in is quickly explained, and Alislinn's (Ash's) gift is quickly revealed and the reader gets to see the issues that this gift creates and how she deals with it. Her suborn nature is also shown in these first few scenes especially with her first meeting with Keegan. I liked that we got to read about Keegan's 'home life' I think this helped to show more of Keegan's character, as well as show more of the Winter Queens character.
I enjoyed Ash's relationship with Seth, and the way in which she can confide in him and he is so accepting of her. I also liked the roller-coaster of emotions that Ash goes through in the course of the book, her determination and love, her confusion and fear.
I feel as though this book could have almost been a standalone it ends so perfectly. It is a part of a series however and even if I didn't already know this there are hints of more to come. Firstly there is the mysterious Irial and also this quote hint at changes yet to come: "It's not perfect, but it will be."

As I reflect on this book as a whole it reminds me on the modern version of A Midsummer Night's Dream by William Shakespeare?
by hills of books