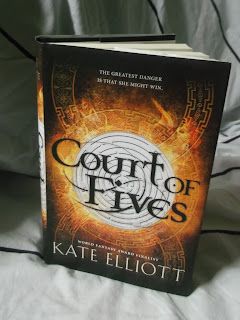 On the Fives court, everyone is equal.

And everyone is dangerous.

Jessamy’s life is a balance between acting like an upper-class Patron and dreaming of the freedom of the Commoners. But away from her family, she can be whomever she wants when she sneaks out to train for the Fives, an intricate, multilevel athletic competition that offers a chance for glory to the kingdom’s best competitors.

Then Jes meets Kalliarkos, and an improbable friendship between the two Fives competitors—one of mixed race and the other a Patron boy—causes heads to turn. When Kal’s powerful, scheming uncle tears Jes’s family apart, she’ll have to test her new friend’s loyalty and risk the vengeance of a royal clan to save her mother and sisters from certain death.

I loved Court of Fives by Kate Elliott. I originally picked up this book because I had seen it talked about as a new release for August 2015 and I am all up for a YA fantasy book. It wasn’t until I had bought it that I released that it was written by Kate Elliott the adult fantasy author. This book has just the right amount of complexity for a beginning of a YA series.


Before I get into what I loved about the writing in this book I want to mention two other things. First I adore this cover, especially the contracts between the white/gold and the black. I wasn’t till after I had started reading this book that I realised that the white on the cover is a maze which links in with the story. Secondly I loved the way which the chapter sizes evolved as the book progressed. To start with the chapter were quite short but as the book developed and the reader became more hooked in and invested in the characters, the chapters grew longer.


The book starts by introducing us to the main characters Jessamy's family and reading their interactions, between the different members in the first few chapters really helped me to learn a lot about them quickly.  The society and the families standing in that society plays a major role in this book and particularly at the start play a significant part in people’s decision making. I really enjoyed the combination on the Fives sporting event and the complex society which I feel as though we have only just brushed the surface of. There seems to be hints of greater issues within the wider society.


Another feature in this book which I think might be encountered more in subsequence books in magic. There are a few mentions and encounters with magic but I not many, which makes me wonder why it was included unless it plays a greater role later in the series.


Many of the characters in this book are hinted at having complex histories and I can’t wait to find out what they are. However, in this book we do get to know Jes’s fathers history and I found him such a confusing character. At first I loved that he was so loyal and obviously in love, but this opinion quickly changed as I read more about him. I just couldn’t believe some of his actions and some of it I can’t even put down to greed. His personality seems to change yet again about half way through the book he seem genuinely concerned which doesn’t make sense!


The ending is great. Feels? Yes! But I enjoyed the tension and I think the situation was realistic with the characters involved. Can’t wait for the next book to see the aftermath of this ending.


Such a amazing start to a series, can’t wait for book two to read more about this world which is full of social divides, adventures, romance and deathly competitions.