Spoilers for the First Two Books in the Partial Sequence. 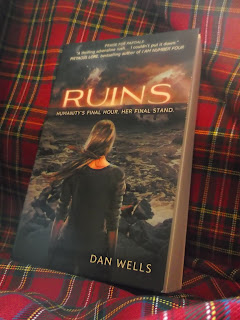 There is no avoiding it—the war to decide the fate of both humans and Partials is at hand. Both sides hold in their possession a weapon that could destroy the other, and Kira Walker has precious little time to prevent that from happening. She has one chance to save both species and the world with them, but it will only come at great personal cost.

After finishing the second book in this sequence I was intrigued about how there could be any solution to the situation which they had found themselves in. When I received this book in the post I was surprised at how small it was. I mean, I know it's 450 pages which is a sizeable book, however compared to Fragment (see my review here) it looks small. I am also not a great fan of the colours of the cover, I can understand that it suppose to be a depiction of the world after the end of the world, but I don't think the cover would draw anyone to read the book.
This book - just like the two before it- is fast paced and we get another issue to add to the growing pile within the first 70 pages. Throughout this trilogy we have been introduced to increasing creeper creatures and what I have nicknamed the 'snowmen' were definitely the creepiest!
I enjoyed the complex back-stabbing and secretive nature of the Trust, it was interesting to see the different ways that the surviving members were trying to save those around them. Are they doing this because they think they have the most chance of saving the people/partials? Or are they feeling guilty that they were responsible for the creation of the current problems?  I enjoyed the whole moral/ethics question's which has played an increasing part in this trilogy. It really highlights how out of control things could get if we 'play-God' too much.
I have to say that I wasn't a great fan of the abrupt ending, I felt as though one minute everyone was trying to kill each other and then [insert spoiler] happened and then it was over. I would have liked an epilogue to see how the characters dealt with the aftermath.

Overall I have enjoyed this trilogy, with it's main survival theme and that splash of romance, the main character's were developed  and situations were complex.
by hills of books