Spoilers If You Haven't Read Defy 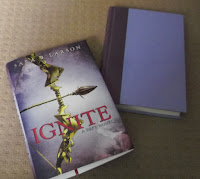 Alexa remains by the newly crowned King Damian’s side as his guard, ever committed to helping him rebuild Antion and reclaim the hope of Antion's people, despite continuing to harbor a secret love for him. However, when another threat to Damian and his kingdom emerges, and blame is cast on their newly forged allies from Blevon, Alexa knows things are not what they seem. With the fate of her nation hanging in the balance once again, will Alexa be able to protect her king and uncover the true enemy -- before it's too late?


As soon as I had finished the first book I couldn't wait for the second one to arrive, once it had I read it in one day. I felt as though it deserved 4 stars for the following reasons;

1) Romance - I like the way that it wasn't focused on the love triangle but more on Alexa's own reasoning for not being with the one she loves. Also the jealousy added to this romance theme in the book. (one negative thing about the romance was that one chapter where love was the main theme that was a bit ... cheesey.)

2) Secrets and betrayal- this book has less secrets than the last book but way more friends turning on friends.

3) Action - as expected lots of fighting.

4) Mystery - lots of unanswered questions. Things are mentioned in this book that I think will be relevant in the third book or will be at least explained more.

5)A ending that leaves you wanting more.
by hills of books