WEE REVIEW: The Prophecy (Saga of the Chosen #1) by Petra Landon 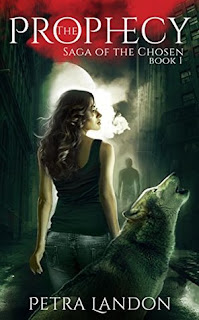 
A powerful wizard threatens the Chosen from beyond the grave. Can they unravel The Prophecy in time to save their world!

Chosen have walked the earth for time immemorial. Tasia is a very special Chosen. Warned to keep her distance from her brethren, she makes a fateful decision one night to assist an injured Shape-shifter. Suddenly, Tasia finds herself in the cross-hairs of Shifter mercenaries encroaching on San Francisco. Forced out of the shadows, Tasia has little choice but to ally herself with the local Shifter Pack led by a formidable and dangerous Alpha Protector. In the cut-throat world of a Shifter Pack, Tasia must fight to protect her secrets while struggling to negotiate with the enigmatic Alpha who holds his violent Pack together with a ruthless hand on its reins.

Grave danger threatens their world as a powerful wizard exploits an old prophecy to divide the Chosen. When the Pack is asked to investigate the twenty-five year old mystery, Tasia is drawn deeper into a past that risks raising the suspicions of the very Chosen she hides from. As danger closes in on her, Tasia must decide who to trust with the deadly secrets she guards.


Add on Goodreads
Published January 27th 2017
Source: Bought
Wee Review (4 Stars)
This was a bit of surprise of a book. Although I had read good reviews of this book, I didn't have that high of an expectations for it, with the generic urban fantasy cover and the unoriginal title I couldn't keep my hopes that high for it. However, I did give this book a try based on the review and recommendation of Bite Into Books, and I am glad I listened and gave this book a chance, because it has pleasantly surprised me.
Pros:
Cons
Final Thoughts
Over all I enjoyed this book, I look forward to the release of the sequels, where I hope that answers will be discovered, secrets revealed, and friendships and alliances strengthen and evolve.


.
by hills of books