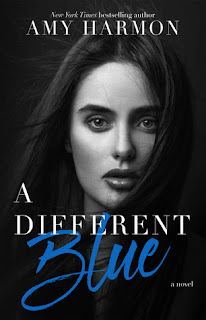 
Blue Echohawk doesn't know who she is. She doesn't know her real name or when she was born. Abandoned at two and raised by a drifter, she didn't attend school until she was ten years old. At nineteen, when most kids her age are attending college or moving on with life, she is just a senior in high school. With no mother, no father, no faith, and no future, Blue Echohawk is a difficult student, to say the least. Tough, hard and overtly sexy, she is the complete opposite of the young British teacher who decides he is up for the challenge, and takes the troublemaker under his wing.

This is the story of a nobody who becomes somebody. It is the story of an unlikely friendship, where hope fosters healing and redemption becomes love. But falling in love can be hard when you don't know who you are. Falling in love with someone who knows exactly who they are and exactly why they can't love you back might be impossible.
Add on Goodreads
Published March 29th 2016 by CreateSpace
Source: Received a copy via Netgalley
Review (4.75 Stars)
This book started a bit like a crime show episode with : a glimpse of someone's life, then their death followed by small scene of a investigation before finally zooming to a other persons seemingly unconnected (although we all know there has to be some connection) life.
Once passed the crime show like prologue, we follow a girl called Blue in her last year of high school. I enjoyed the way that from the start we get to see the mask Blue has created for herself and it was interesting though the school year to see the two different sides of Blue. Her 'slutty' shameless and outgoing mask when she is in school, and her more quite and lost personality when she is at home. This first half of the book while Blue is still in school, shows how much teacher's can impact their students lives. It highlighted the power of other people believing in you, and the impact that can have on the views you have of yourself as well as the ways in which you view the world and your place in it.
The second part of the book we follow Blue as she tries to find out more about her past and her birth family. However, I felt as though the theme of this half of the book was more about realizing that your blood family isn't the only family you can have, but rather you can create you own family from those who have your back, care and love you.
This is such a powerful story of a broken, forgotten girl (who's very good at playing the role she created to hide this), who is on a quest to find herself and a teacher determined to see her for who she is and help her discover her true self, and find her place in the world. We also get a great side theme of romance, it is messy at some points and beautiful at other points.
I am not often a fan of teenage contemporary romance's but this one is fluffy and fake, this is deep, heart-breaking, full of loss and self doubt, searching and finding, of discovering and falling.
My Favourite Quotes from A Different Blue
"There's a whole lot more to most people than meets the eye, Wilson. Unfortunately, a lot of times it isn't good stuff. It's scary stuff, painful stuff. By now, you know so much scary, painful stuff about me, it's a wonder you're still around."
“Someone told me once that to create true art you must be willing to bleed and let others watch.”
by hills of books