January Releases I am Adding to my TBR

There is an insane amount of releases which I will be adding to my TBR (to-be-read) pile in January. Quite a few of these are sequels which I need to catch-up on the series first but I am still excited for them. Let get straight into it then, lots of books to look at today:

RoseBlood by A.G. Howard
Add on Goodreads
Release Date: 10th January 2017
Shortened Synopsis
In this modern day spin on Leroux’s gothic tale of unrequited love turned to madness, seventeen-year-old Rune Germain has a mysterious affliction linked to her operatic talent, and a horrifying mistake she’s trying to hide. Hoping creative direction will help her, Rune’s mother sends her to a French arts conservatory for her senior year, located in an opera house rumored to have ties to The Phantom of the Opera.
Frostblood (#1) by Emma Blake
Add on Goodreads
Release Date: 10th January 2017
Shortened Synopsis
Seventeen-year-old Ruby is a fireblood who must hide her powers of heat and flame from the cruel frostblood ruling class that wants to destroy all that are left of her kind. So when her mother is killed for protecting her and rebel frostbloods demand her help to kill their rampaging king, she agrees. But Ruby's powers are unpredictable, and she's not sure she's willing to let the rebels and an infuriating (yet irresistible) young man called Arcus use her as their weapon.
Poison's Kiss (#1) by Breeana Shields
Add on Goodreads
Release Date: 10th January 2017
Synopsis from Goodreads
Marinda has kissed dozens of boys. They all die afterward. It s a miserable life, but being a visha kanya a poison maiden is what she was created to do. Marinda serves the Raja by dispatching his enemies with only her lips as a weapon.

Until now, the men she was ordered to kiss have been strangers, enemies of the kingdom. Then she receives orders to kiss Deven, a boy she knows too well to be convinced he needs to die. She begins to question who she s really working for. And that is a thread that, once pulled, will unravel more than she can afford to lose.
Carve the Mark by Veronica Roth
Add on Goodreads
Release Date: 17th January 2017
Shortened Synopsis
On a planet where violence and vengeance rule, in a galaxy where some are favored by fate, everyone develops a currentgift, a unique power meant to shape the future. While most benefit from their currentgifts, Akos and Cyra do not — their gifts make them vulnerable to others’ control. Can they reclaim their gifts, their fates, and their lives, and reset the balance of power in this world?
Caraval by Stephanie Garber
Add on Goodreads
Release Date: 31st January 2017
Shortened Synopsis
Welcome, welcome to Caraval―Stephanie Garber’s sweeping tale of two sisters who escape their ruthless father when they enter the dangerous intrigue of a legendary game.

The Edge of Everything by Jeff Giles
Add on Goodreads
Release Date: 31st January 2017
Shortened Synopsis
It's been a shattering year for seventeen-year-old Zoe, who's still reeling from her father's shockingly sudden death in a caving accident and her neighbors' mysterious disappearance from their own home. Then on a terrifying sub-zero, blizzardy night in Montana, she and her brother are brutally attacked in a cabin in the woods--only to be rescued by a mysterious bounty hunter they call X. X is no ordinary bounty hunter. He is from a hell called the Lowlands, sent to claim the soul of Zoe's evil attacker and others like him.
﻿

Sequels to Series I Have Begun to Read

Mafiosa (Blood for Blood #3) by Catherine Doyle
Add on Goodreads
Release Date: 5th January 2017
This is one of the series which I am actually up-to-date with and I am so excited to read this one. I already received my pre-order of this book, just need to finds a few hours to sit down and lose myself in this amazing story again. Would highly recommend the Blood for Blood series, find my review of the first two books here.
Fire Touched (Mercy Thompson #9) by Patricia Briggs
Add on Goodreads
Paperback Release Date: 31st January 2017
The Mercy Thompson series is one what I fell in love with many years ago and the last 9 ish months have been a test of will. The hardback edition of this book came out in March, but I own the paper back editions of the rest of the series, so I have been waiting patiently for the paperback to come out, not long to wait now!!
Snared (Elemental Assassin #16) by Jennifer Estep
Add on Goodreads
Release Date: 31st January 2017
This is a series which I need to catch up with I have read the first 13 books but I have been pacing myself with this series. I would recommend this series to the lovers of the action packed assassin novels but with strong family bonds and the strains for romance.
Windwitch (Witchlands #2) by Susan Dennard
Add on Goodreads
Release Date: 10th January 2017
This is sequel which I am going to wait to read. I wasn't wowed by Truthwitch, with the amount of hype I was expecting more than I got (see my review here). So with this one I am going to wait and read the positive and negative review first before deciding if I should pick this sequel up.
Dawn Study (Souldfinder #3) by Maria V. Snyder
Add on Goodreads
Release Date: 31st January 2016
This is a series which I am conflicted about. I love Maria V. Snyder's work and up until recently she has been an auto-buy author for me. I was so excited when I heard that we were getting more from the Ixia world, but I have always preferred Opals (glass) story to Yelena's - I must be one of a minority. I read Shadow Study when it came out and was disappointed, an haven't picked up Night Study yet. Still confused on my feelings on this series.
Traitor to the Throne (Rebel of the Sands #2) by Alwyn Hamilton
Add on Goodreads
Kindle Release Date: 31st January 2017
Love Hamilton's debut Rebel of the Sands (see my review here) and I can't wait to see what she is has done with these beloved characters now.

Sequels to Series I Haven't Begun to Read 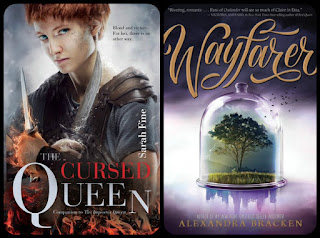 The Cursed Queen (The Impostor Queen #2) by Sarah Fine
Add on Goodreads
Release Date: 3rd January 2017
I have had The Imposter Queen on my to-buy list for months, but never bought it and at this point I might just wait until it comes out in paperback. Anyway, I love the sound of the first book, but this sequel seems to be following different characters (something that authors do all too often, which I hate) so I might not read this sequel but will defiantly check out the first book.
Wayfarer (Passenger #2) by Alexandra Bracken
Add on Goodreads
Release Date: 3rd January 2017
I bought Passenger back in April 2016 and I have yet to read it! I did a review collection for this book and saw a wide range of thoughts on this book, so I am intrigued to see my own thoughts on it. Just need to find time to get around to reading it!