Didn't manage to haul that many books in November so decided that I would pop them into this haul. I have - as a result of Christmas presents and my own last of will power - quite a few books to share with you today. I also found time to do a wee photo shoot with my new books, so here we are: 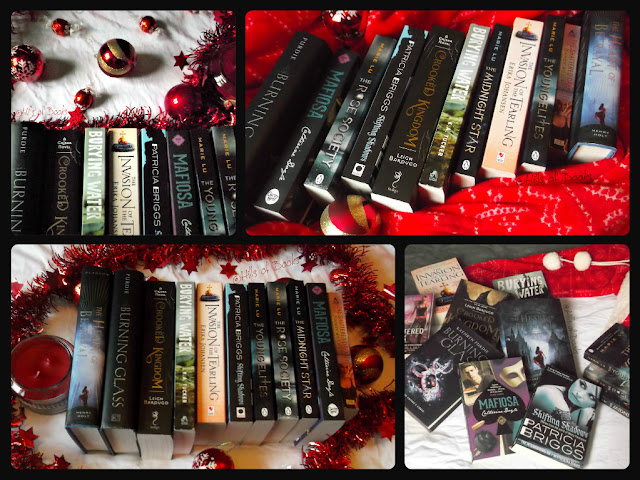 Burning Glass by Kathryn Purdie
Shortened Synopsis
Tasked with sensing the intentions of would-be assassins, Sonya is under constant pressure to protect the emperor. But Sonya’s power is untamed and reckless, and she can’t always decipher when other people’s impulses end and her own begin.As she struggles to wrangle her abilities, Sonya seeks refuge in her tenuous alliances with the charming-yet-volatile Emperor Valko and his idealistic younger brother, Anton, the crown prince. But when threats of revolution pit the two brothers against each other, Sonya must choose which brother to trust—and which to betray
Shifting Shadows by Patricia Briggs
Shortened Synopsis
A collection of all-new and previously published short stories featuring Mercy Thompson, “one of the best heroines in the urban fantasy genre today” (Fiction Vixen Book Reviews), and the characters she calls friends…
Mafiosa (Blood for Blood #3) by Catherine Doyle
Shortened Synopsis
A blood war rages on the streets of Chicago.
The third and final instalment in the explosive YA Blood for Blood series which started with Vendetta and Inferno.
Crooked Kingdom (Six of Crows #2) by Leigh Bardugo
Shortened Synopsis
The sequel to the much loved Six of Crows. A war will be waged on the city's dark and twisting streets―a battle for revenge and redemption that will decide the fate of magic in the Grisha world.
The Young Elites Trilogy by Marie Lu
Trilogy Synopsis
The Young Elites is set in a Renaissance-like world where magic is new, chaotic, and misunderstood, and three rival societies with supernatural abilities battle for power. And a girl transforms from an unwanted daughter into a fearsome leader, igniting panic and sparking war between seven nations.
The Invasion of the Tearling (The Queen of the Tearling #2) by Erika Johansen
Shorten Synopsis
With each passing day, Kelsea Glynn is growing into her new responsibilities as Queen of the Tearling. But as the Mort army draws ever closer, Kelsea develops a mysterious connection to a time before the Crossing, and she finds herself relying on a strange and possibly dangerous ally: a woman named Lily, fighting for her life in a world where being female can feel like a crime. The fate of the Tearling —and that of Kelsea’s own soul—may rest with Lily and her story, but Kelsea may not have enough time to find out.
The Shattered Dark (Shadow Reader #2) by Sandy Williams
Shortened Synopsis
McKenzie was a normal college student, save for one little twist: she’s a shadow reader, someone who can both see the fae and track their movements between our world and the Realm. But when her best friend, Paige, disappears McKenzie knows her wish is, for now, just a dream. McKenzie is the only one who can rescue her friend, but if she’s not careful, her decisions could cost the lives of everyone she’s tried so hard to save.
The Heart of Betrayal (The Remnant Chronicles #2) by Mary E. Pearson

Shortened Synopsis
Wrestling with her upbringing, her gift, and her sense of self, Lia must make powerful choices that will affect her country... and her own destiny.

Shorted Synopsis
Left for dead in the fields of rural Oregon, a young woman defies all odds and survives—but she awakens with no idea who she is, or what happened to her.Taken in by old Ginny Fitzgerald, she slowly begins building a new life. But as she attempts to piece together the fleeting slivers of her memory, more questions emerge: Who is the next-door neighbor, quietly toiling under the hood of his Barracuda? Why won’t Ginny let him step foot on her property? And why does Water feel she recognizes him?
***
11 new books have now been added to my TBR bookcase and I am once again running out of space for unread books!! As well as these book above I have received some mysterious book mail which I am still trying to workout where it came from!
What books did you get for Christmas?