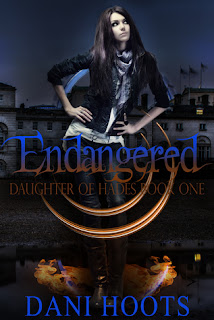 * I received a e-copy of this book for review from NetGallery, but this has not affected my review in any way and all views are my own.*

Chrys has been in the Underworld for thousands of years, hidden away by her father, Hades, from all of the other gods. He's afraid that if someone finds out about her, they will destroy her because of the dichotomous power that she holds, the power of life and death. So she has remained in the Palace of Hades all her life, making very few friends and always bored out of her mind.

Huntley would have never guessed that after he died he would wake up with a beautiful girl standing over him. And that she would be the Dark Lord of the Underworld's daughter. Yet, for some reason, she keeps him around as her tutor, as if he knows anything about the world. But Huntley knows that all she really wants is a friend; being trapped in the Underworld can get pretty lonely.

That is, until Chrys decides she wants to run away to the human world after a big fight with her mother Persephone. Chrys claims her father is just over reacting and that nothing bad will come of it. There's no way that the gods will notice she's there for only a couple of days...right?

This has one of my favourite opening paragraph's of my recent reads (read it in my most recent Teaser Tuesday post) and it shows the 'right' amount of sass what our main character Chrys has. The thing that I loved the most about this book has to be the change in perspective of the Hades/ Persephone story. Hades is always portrayed at the evil lord of the underworld, so I was surprised at the loving relationship between Chrys and her father. It was interesting to see the change in the family dynamic when Persephone came 'home'. Seeing Persephone from this new angle made me hate her character, before I always thought of her as a victim but in this book we get to see her as a cheating wife and spoilt Goddess, who wants what she wants and she wants it now.
We get to read some of this book from Huntley's point of view (POV) and you can just 'feel' the adoration for Chrys dripping from every thought. He really does his best to be a good friend and his interactions with Hades were interesting to read.
AJ is a bit of a strange character from the very start - some of his actions make sense after the 'big reveal' about his aims in life - and I would love to know more about his history. Especially any history between him and Chrys, there is a vague hint that something happened between them; were they good friends or was it something more?
I was surprised about the number of demi-god and other Greek mythological creatures Chrys 'stumbles' across during her travels. She of course manages to cause a major scene on Earth, however I could not have predicted how it is all resolved, but it left it on a evil cliff hanger!
Overall this book was enjoyable it was for the most part predictable, but it fun to read and interesting to see the Hades/Persephone story from a new perspective.
by hills of books