March hadn't stuck in my head as a month where lots of books were being released but as I was writing this I just kept on finding more that I liked the look of. So I have 10 books released in March that I think sound like interesting reads so lets get started:

Beyond the Red by Ava Jae

I came across this book when I was looking though Pondering the Prose's reviews and she seemed to have really enjoyed it. The synopsis seems like it is going to be a hate/love romance which I love.

A Study in Charlotte by Brittany Cavallaro

I am a great fan of the BBC Sherlock TV series and I am loving the Sherlock stories retellings. I have to say that I am a bit hesitant to pick this book because I have heard that it doesn't live up the Sherlock that I love to watch.

I heard about this book what feels like so long ago when I was looking for 2016 debut authors and it sounds great: forbidden magic, royalty, revolution and split loyalties. Hopefully it will be a action packed fantasy with maybe a bit of romance?


Into the Dim by Janet B. Taylor

Set in Scotland, secret society, time travel, romance and a time limit to save her mother! I have to say that I don't think that this cover portrays any of this stuff but hopefully it will be a fun read.

Under a Painted Sky by Stacey Lee

I have recently been trying to explore more books set in historical settings and this one is set in 1849. The main character is a Chinese girl hoping to become a professional musician but after an accident she fears for her life, so with the help of a runaway slave she flees town for the unknown frontier. They dress themselves as boys and run into cowboys! What a mix of characters I want to see how it all works together. (The hardback cover is so pretty check it out below.)

I have to say that this is one of those series that I have had on my to- buy list for years and so many people have recommended it but I have never read them. However, now that the last book has come out hopefully that will motivate me to finally read this trilogy.


The Girl from Everywhere (#1) by Heidi Heilig

There has been quite a lot of talk about this on social media in the last few months and the review I have read so far (and there has been quite a few) are positive so that's exciting. It's basically about a ship that time-travels - who need to know any more than that? (I think I personally prefer the Hardback cover for this book see it below)

Map of Fates (The Conspiracy of Us #2) by Maggie Hall

This series is another one of those which I LOVE the sound of but I have yet to read. The first book The Conspiracy of Us looks like a romance, mystery, with every character having secret pasts.

Cross the Stars (#1) by Venessa Kimball

This is a adult contemporary - I know, something I normally don't go for but this one caught my eye. I did a Waiting on Wednesday post for this book so check that out if you want to see what it's about and why I want to read it.

If you didn't know, I love the Mercy Thompson series and have reread it an unmentionable number of times so can't wait for this latest instalment in the series.

If you didn't work it out for this book's title this is a re-telling of Jayne Eyre. The last re-telling of this story I read - Ironskin was slightly disappointing, it was a okay book but I had high hopes for it and it didn't fulfil them. Hopefully this one be a more enjoyable book, and readers, look at that line on the front cover, I have a feeling this book is gonna be good!

The final book in the Winner's Trilogy! Well I am excited about this, it means that I can final read the first book which has been on my shelves for a few year (yes years!) now. I decided when I read some of the reviews of the first books (and people love for them) that I was going to marathon read these book (read them one after the other) and that required all the books to be published, and now they are, so I can read them. Hopefully they will have been worth the wait.


Hardback Covers of some of the books mentioned above: 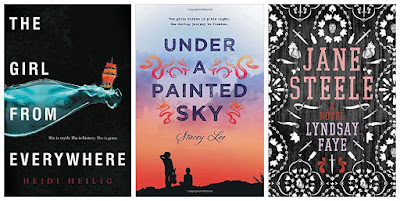 Let me know if you prefer the Hardback or Paperback cover designs and tell me what you think about any of these books - have you already read any of them (what did you think?) or you excited about their release just like me?