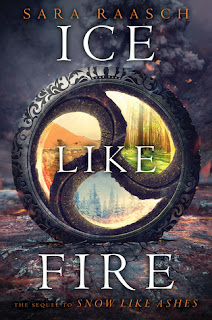 It’s been three months since the Winterians were freed and Spring’s king, Angra, disappeared—thanks largely to the help of Cordell.

Meira just wants her people to be safe. When Cordellan debt forces the Winterians to dig their mines for payment, they unearth something powerful and possibly dangerous: Primoria’s lost chasm of magic. Theron sees this find as an opportunity—with this much magic, the world can finally stand against threats like Angra. But Meira fears the danger the chasm poses—the last time the world had access to so much magic, it spawned the Decay. So when the king of Cordell orders the two on a mission across the kingdoms of Primoria to discover the chasm’s secrets, Meira plans to use the trip to garner support to keep the chasm shut and Winter safe—even if it means clashing with Theron. But can she do so without endangering the people she loves?

Mather just wants to be free. The horrors inflicted on the Winterians hang fresh and raw in Januari—leaving Winter vulnerable to Cordell’s growing oppression. When Meira leaves to search for allies, he decides to take Winter’s security into his own hands. Can he rebuild his broken kingdom and protect them from new threats?

As the web of power and deception weaves tighter, Theron fights for magic, Mather fights for freedom—and Meira starts to wonder if she should be fighting not just for Winter, but for the world.


I think this book suffered from the second book syndrome where it's more of a filler than anything major happening plot wise. One thing that was gone very well in this book was the world building as we got to see more of the various kingdoms and learn more about the different customs and cultures.

The first chapter of this book shows the reader that although Meira is now the Queen she is still has the desire to be a warrior, it also shows us that Cordell is still as controlling as in the first book presenting Meria with the issue of ruling her kingdom while also repaying - and being controlled by Cordell.

Mather's POV shows how much he has changed since he found out he wasn't actually the king, he seems to be consumed by anger and frustration. At the start of the book Mather was a in my opinion seemed weak and almost moping about the situation but as the book goes on he seems to grow more confident and is more willing to stand-up for what he wants and what he believes winter needs.

It was great to read more about the different kingdoms and the culture and the attitudes of the rules explained why they never reached out to help winter, something I didn't really understand in the first book. It was also great to see some more strong-willed women make an appearance - like Ceridwen - as before it seemed like Meria was the only woman who was willing to fight for what they wanted.

It takes quite a while for the various charterer's to get their head together and actually act. But when they do we get a dramatic show down where some loyalties become very clear and other remain a bit of a mystery. The romance was less of a focus in this book than in the first, the majority of the romance in this book is Meria trying to work out what Theron is up to - something I am still trying to do - and also what her feeling are for him.

Overall a good read, it wasn't quite as good as the first book but it was great at expanding the readers knowledge of the world, and also introduced new characters to create the stage ready for the final book in the trilogy.
by hills of books