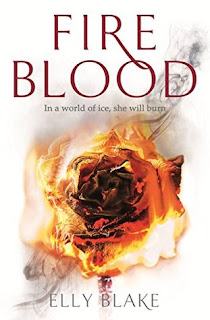 In this action-packed sequel to Frostblood, the future of Ruby's world and a court ruled by the love of her life depends on the uncovered secrets of her past.

Against all odds, Ruby has defeated the villainous Frost King and melted his throne of ice. But the bloodthirsty Minax that was trapped inside is now haunting her kingdom and everyone she loves. The answers to its demise may lie to the south in Sudesia, the land of the Firebloods, and a country that holds the secrets to Ruby's powers and past....


Despite warnings from her beloved Arcus, Ruby accompanies a roguish Fireblood named Kai to Sudesia, where she must master her control of fire in a series of trials to gain the trust of the suspicious Fireblood queen. Only then can she hope to access the knowledge that could defeat the rampaging Minax - which grows closer every moment. But as sparks fly in her moments alone with Kai, how can Ruby decide whom to trust? The fate of both kingdoms is now in her hands.
Add on Goodreads
Source: e-ARC via netgalley
Release Date: 7th -12th September 2017
REVIEW
(3.75 STARS)
I has been quite a while since I read the first book but I found it quite easy to slip back into the story. We are given just enough information to know what happened in the last book - as so to understand what is happening in this one - but it doesn't go into long details that you feel as though you were re-reading the first book.

I was worried when I read the synopsis 'But as sparks fly in her moments alone with Kai, how can Ruby decide whom to trust?' i was worried about a love triangle. As I rediscovered Ruby and Arcus's love, I loved the sweet moments between them in the first few chapters. I still can't decide if their parting was sweet or just cheesy/ sickly / needy. Yet as Ruby and Kai spend more time together -despite his lies- I began to change the direction of my ship. But when the full emotional effect of the love triangle comes into play later in the book I am not sure which couple I ship.

Although Kai - as I have mentioned- does lie I do like him as a character, he is uncannily cleaver, quick to change moods, tuned into others emotions and seemly well liked by those around him. The queen remains a bit of a mystery, when Ruby first meets her she seems so harsh but during their second meeting you can see her love for her people.
Once Ruby gets to Sudesia I felt as though Fireblood became a quite paced novel with one obstacle after another presenting itself. We get some surprise revelations and some edge of the seat encounters, although Fireblood did begin at a slow plod it soon drew me back into this world of fire and ice and soon swept me away.
by hills of books