So it's the last weekend of August, (already!!)  and I have just finished a very under loved book. It is a new-ish release as it was only released at the end of July, but since then it has only collected 6 reviews on Goodreads. So to share the unloved amazingness of this book I am making it my featured book for this month. I also shared a teaser from this book on Tuesday in this week Teaser Tuesday post. 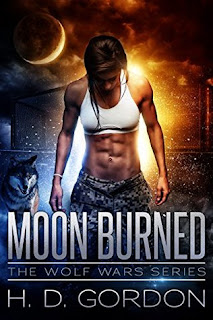 Those are the rules of The Ring. Two wolves enter, one wolf leaves.

Rukiya Moonborn is a slave, a werewolf whose master forces her and many others to fight to the death for the entertainment of the wealthy. Named 'Dogs' after the lesser beasts, wolves like Rook live short, violent lives. The masters dangle the illusion of hope in front of the Dogs by insisting any wolf who survives 100 fights in The Ring can win his or her freedom.

Rook is on her eighteenth fight against the West Coast Champion—the biggest she-wolf anyone has ever seen. As if this weren't enough, Rook finds a wolf pup who is destined for slavery as a Dog, and helps the child escape the master's clutches—a crime easily punishable by death.

When Ryker—the master's handsome right-hand—catches her in the act, Rook embarks on a journey that will be the ultimate test of her courage and strength.
Add on Goodreads
Buy from Amazon (UK)

I took a risk on this book, it wasn't a author I had ever heard of, I hadn't seen it anywhere and it didn't have that many reviews. However, the synopsis caught me enough to read the first few chapters and then I couldn't put it down.
There are several things which drew me and created such a great book. Firstly, the brutal setting, the only way I can think of describing the world created in this book is, a supernatural Roman world, complete with slaves, gladiator tournaments and political plays - so vividly sculpted. Secondly, Rook is such a badass. She has grown up a slave in this brutally  society made to kill for entertainment  yet she compassionate, kind and courageous. Thirdly, has to be suddenness of changes in Rook's life, each time it happens it changes the Rooks goals and priories and  although she fights tooth and nail to ensure this persons safe or that person is shown their place, it demonstrates how little control - as a slave - she has over the bigger thing in her life. Another aspect I like in this book was the love/hate, I shouldn't/ I want to, budding romance, which I enjoyed watching develop and change.
Over all, this book was a bit of a surprise to me, I am fascinated by female gladiator characters and this mixed that with the supernatural theme which I have been hooked into at the moment. Not your typical werewolf book and worth the time and money. There is still lots of questions that need to be answered at the end of this book so I look forward to the second book, where I hope there will be some reunions, revolutions and romance!
***
by hills of books