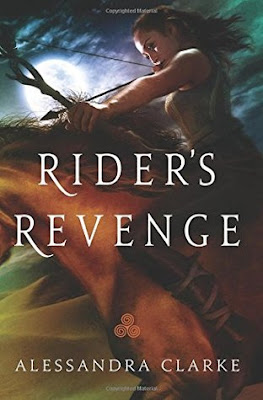 Synopsis from Goodreads
K'lrsa is a Rider for the White Horse Tribe who sets out to avenge the brutal murder of her father but finds herself in a society very different from the one she's known. She also finds that revenge isn't near as simple as she thought it would be and that she'll have to choose between killing the man she thinks is responsible and being with the man she loves.
Add on Goodreads
Buy from Amazon (UK) || Amazon (US)
First Published September 24th 2015
ISBN13: 9781516880188
Series: The Rider's Revenge Trilogy
Source: Kindle Purchase

(4 Stars)
To put it plainly I really loved this book but wasn't entirely behind the romance - a vital part of almost all my 5 star reads.

Our main character K'lrsa, is a strong willed female in a world where men are the dominant force. In the first half of the book we can really see K'lrsa persistent nature and her determination to achieve her revenge. She also seems to be quite impulsive and emotionally driven in her decisions.

I loved the contrast of the two 'worlds' and it made me think of that that must have been like in the past, when western societies ideas and culture began to infringe on the native ways of life. It was good to read of K'lrsa experiencing culture shock as she is dragged into such an alien society. I enjoyed the political intrigue and the court manoeuvres. It was also interesting to see the city life from K'lrsa's perspective. It makes you think about the conditions that people can live under if that is all they have ever known, and how a whole society can be indoctrinated to accept things.

There where two thing which I didn't love about this book. Firstly, I found the whole 'dream twist' all too predictable. This doesn't mean that every twist was predictable, not by a long shot. As we come closer to the end of the books, there is a series of event that were completely (in my opinion) out of the blue and unpredictable. Secondly, as I mentioned earlier I just couldn't 'ship' this romance 100%. Near the beginning of the romance it reminded me of Ammey McKeaf in that the that they fall for each other while in a servant/master relationship, but also while also hiding their identities and with holding information. I also wasn't a big Badru fan, he just annoyed me when he spoke, he was too much of a rule follower rather than a conscience follower. He is also inconsistent some times he too fixated on his power while other times he plays the love sick fool - he confuses me!

Overall, I enjoyed this book it has some great side characters and ending that will roll nicely into a sequel.
by hills of books