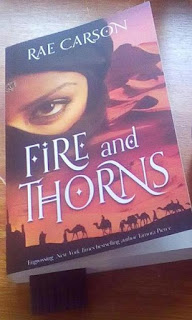 Princess Elisa is a disappointment to her people. Although she bears the Godstone in her navel, a sign that she has been chosen for an act of heroism, they see her as lazy and useless and fat. On her sixteenth birthday, she is bartered off in royal marriage and shipped away to a kingdom in turmoil, where her much-older-and extremely beautiful-husband refuses to acknowledge her as his wife. Devastated, Elisa decides to take charge of her fate and learn what it means to bear the Godstone. As an invading army threatens to destroy her new home, and everyone at court maneuvers to take advantage of the young princess, Elisa becomes convinced that, not only is her own life in danger, the whole world needs saving. But how can a young girl who has never ridden horseback, never played the game of politics, and never attained the love of a man save the world? Elisa can't be sure, but she must try to uncover the Godstone's secret history before the enemy steals the destiny nestled in her core.

I have to start this review of by saying that I don't totally know what I feel about this book, I mean I enjoyed it there were a few things about it that I didn't like but, apart from that it just didn't wow me for some reason. I bought this book because I have read/watched quite a few people who raved about it and recommend it to people who liked Kristin Cashore (which I did).  Before I dive into what I liked/didn't like about the plot I have to say I would have loved a map, also I didn't like that the copy of the book that I got was published with a slightly different title that always confuses me.
There is a lot of mystery in this book, in the beginning Elisa doesn't seem to know much about the Godstone and even though she knows more about by the end of this book there is still mystery surrounding it. There is also mystery about her new husband and his actions are a bit confusing but I like that she learns why he acts like he does. Despite all this mystery the main theme of this book is about Elisa finding her purpose in life, which she seems to have done by the end of this book, but with hints that she hasn't yet completed what the prophesy predicted.
One of the main side themes is the romance, I really enjoyed this side of the story when I released that this book was going to have a common trope, I was a bit disappointed. However this situation was resolved in a way I haven't read before (I am sure it has been used in another book, I just haven't read it) so it surprised me and I greatly enjoyed it.
Although having said all that, it took me quite a while to get into this book, the first 2 part of the book were OK but the last part of the book I really enjoyed and couldn't put down. I don't really know why this was but I think that I was at the point getting to know that characters and the world, so that made it all the more enjoyable. My one negative about this book came in the first part of the book were we were told over and over again about Elisa's size. I love that we had a over weight main character but I got annoyed at it being mentioned and emphasised over and over again.
I hope we get to see more of Rosario and Lord Hector in the following books as I love their personalities. I would also like to see some interaction between Elisa and her sister at some point in the rest of the series, as I want to know how they would get on since Elisa's transformation.
by hills of books